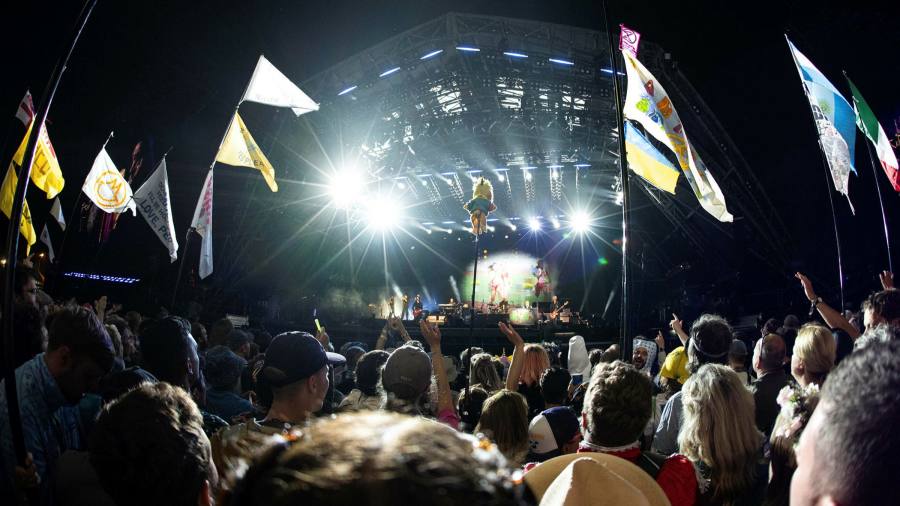 You don’t need a crowd for a joint moment

Is it bad that I turned down tickets to see the Rolling Stones in Hyde Park last weekend and watched Paul McCartney on TV instead? “Yolo” my daughter muttered sarcastically as she found me rocking with Bruce Springsteen and Dave Grohl over a nice glass of chilled rosé, lying on the sofa, as McCartney closed his (arguably quite uneven) set.

You indeed only live once, I told him, as the muffled pyrotechnics erupted in the finale. The fact that I could enjoy a two and a half hour concert without having to queue for a Portaloo struck me as the epitome of a life fully lived.

Contrary to the post-pandemic narrative that insists we must all now wish to stick together, I’m much happier enjoying these big cultural events from the comfort of a darkened room. So much has been said about the experiential moment, assuming that we must crave social contact. It now seems disloyal, even unpatriotic, to slouch on your couch when you could rush headlong into the fray.

The fact that I could enjoy a two and a half hour concert without having to queue for a Portaloo struck me as the epitome of a life fully lived.

Glastonbury received record numbers of revelers this weekend, and the summer calendar is now littered with long-postponed, rescheduled or delayed occasions. We should be grateful, we are reminded, for every blessed opportunity to come together: each week is punctuated with dinners, launches and events. My calendar is rumbling with “Thank God we can all be together again” parties. Central London, so long tinged with a dystopian absence, is now teeming with people, tourists, children. So much for the thoughtful journeys and resets: we seem determined to live deeply and suck all the marrow out of life.

I never needed a warrant from the government to be persuaded that it was always in my interest to stay indoors. As everyone rushes to soak up this hectic summer season, I’m already longing for some peace and quiet.

Such a sad existence, you shudder, brushing the grass stains of another meadow-scented bacchanalia. Don’t I want to feel a thousand limbs pressed against me? Don’t I want to drink in the euphoria of the crowd?

“I prefer festivals with you, on distant sofas”, I WhatsApped a friend with whom I watched Glastonbury for many years and with whom text chat is now as much a summertime ritual as it is for real attendees . I couldn’t imagine wanting to be there, drinking pints of soup out of cardboard. “Even if we were,” the message returned, “we would need to text each other from opposite ends of the crowd.”

Of course, like you, I love a cultural moment: but my favorite community experience is watching real events while texting or checking Twitter on my phone. I had about three concurrent threads running through Glasto: likewise ‘must-see TV dramas’, general election and this week sewing bee. The “2020 Election Special” panel chat has been ringing off and on since the Biden/Trump debacle, and picks up for House confidence votes, by-elections and White House seats. It’s the perfect forum for interactions – all brains and no BO.

You don’t need a crowd to have a common moment. To that end, it’s been particularly gratifying to find that Netflix is ​​jumping on the bandwagon and slowing things down. In a bold move for Netflix, fans of stranger things were forced to wait a full five weeks for the final episodes of this latest series, as the binge-watch model was declared obsolete. Admittedly, the move follows a vast drop in subscriber numbers and a share price that since November has fallen 73%. The tasting and sharing mode once considered so old-fashioned has been brought back to stop subscriber churn. Not so captive anymore, streamers are now vying for their audiences in a busy and distracted world. The weekly episodic model spreads the hype on social media and eventually, they hope, sees audiences returning.

The deployment seems to be working: the five-week void between stranger things episodes has allowed a large online community to form. TikTok is currently a screed of ST fan theories as subscribers rewatch old episodes to comb through the show for clues. The death of the binge watch makes sense economically. It also makes for a much more rewarding experience of watching things in real time.

With episodic television, as with live performances, the value of expectation cannot be overlooked. Glastonbury, which missed two editions due to Covid, has now been streamed on BBC iPlayer a record 34.1 million times. Paul McCartney’s performance had a peak audience of 3.9 million while Diana Ross recorded an average audience of 3.1 million. Frenzy is OK in the moment, but nothing beats seeing something like a gang. And it doesn’t matter if you’re out in the field or watching with millions of others on a couch, the moment is always more magical when it unfolds in real time.

How can IT choices affect the future of sport?