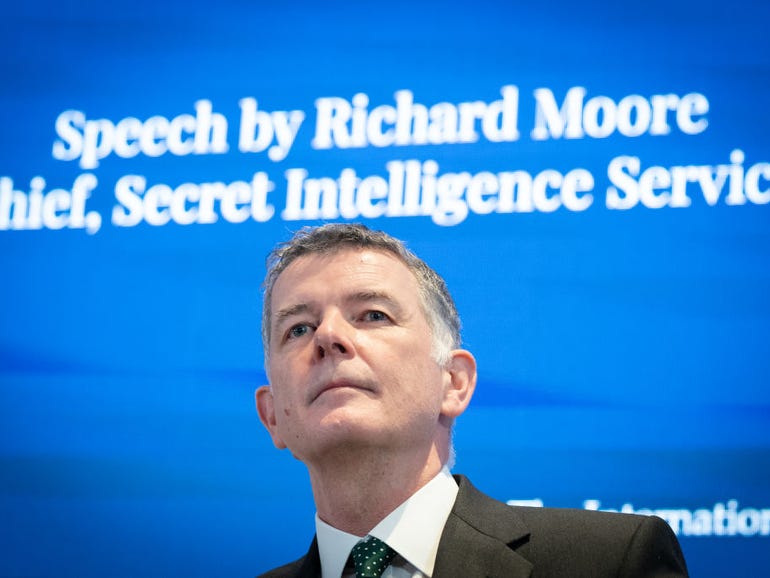 The rise of technologies such as artificial intelligence (AI) and quantum computing is changing the world – and intelligence services must adapt to function in an increasingly digital environment, the MI6 chief warned.

In his first public address since taking on the role of “C” in October 2020, Richard Moore, head of Britain’s Secret Intelligence Service (MI6), spoke of the challenges posed by rapidly evolving technology.

While computer developments such as AI and quantum computing may provide society with what he described as “breakthroughs,” Moore warned that they also lead to additional security threats to which MI6 will have to face.

â€œOthers would tell you about the benefits of these new discoveries – and there are countless – but I get paid to look at the threat side of the ledger. MI6 treats the world as it is, not the way we would like it to. , and the digital attack surface that criminals, terrorists and hostile states seek to exploit against us is increasing exponentially, “he said, in a speech at tInternational Institute for Strategic Studies (IISS).

Moore warned that China, Russia and Iran are the most significant nation-state threats to the UK that could harness the technology to achieve their goals, citing the SolarWinds cyberattack, which has been attributed to the Russian foreign intelligence, as a key example of this. .

In order to meet the challenges posed by the growing global digital environment, MI6 must ensure it has the human intelligence capabilities to analyze and understand data that could help deliver insights, keep agents on track. the ground informed and, ultimately, to protect the UK from threats. .

â€œThere is no longer an analog intelligence operation in this digital world,â€ Moore said. â€œAll of this requires insight from data, tools to manipulate data and, most importantly, the knack for turning complex data into human information. The combination of technological prowess and insight from human intelligence gives the UK a powerful advantage. “

He warned: “Our adversaries are investing money and ambition in mastering artificial intelligence, quantum computing and synthetic biology because they know that mastering these technologies will give them a leverage.”

Moore warned that MI6 “must be at the forefront of what is technologically possible” in order to have the best chance of protecting the UK from security threats.

But while MI6 has traditionally worked in the shadows, it is now stepping out to make sure it has access to the people needed to help solve problems with new technology.

“We cannot match the scale and resources of the global tech industry, so we shouldn’t try. Instead, we should seek their help. Through the National Security Strategic Investment Fund, we are opening up our mission issues to those with talent in organizations that wouldn’t normally work with national security. Unlike Q in the Bond films, we can’t do it all in-house, “said Moore.

By bringing in outside experts in emerging technologies, the aim is to help improve MI6 operations and innovate faster than the UK’s adversaries – and this represents a significant change from the United Kingdom’s covert operations. past, which, he stressed, also requires increased diversity to better represent the population served by MI6.

â€œI cannot stress enough the drastic change this represents in the culture, ethics and way of working at MI6, as we have traditionally relied primarily on our own capabilities to develop the world-class technologies that we need. to stay secret and carry out our mission, â€Moore said, addingâ€œ We have to become more open, keep secret, â€he added.

By adapting MI6 to be able to bring expertise to help work with emerging technologies, it is hoped that this will allow intelligence services to protect the UK from threats no matter where they are from in the world.

â€œMy mission as leader is to ensure the successful transformation and modernization of our organization: to expand the secret human relations of MI6 to reflect the changing nature of power and influence in the world; invest in the skills a global intelligence agency needs in the digital age and meet the technological challenge head-on by opening ourselves – to an unprecedented degree – to partners who can help us harness the technologies we have need for our operations and enable us to innovate faster than our adversaries, â€said Moore.

When is the software too complex?