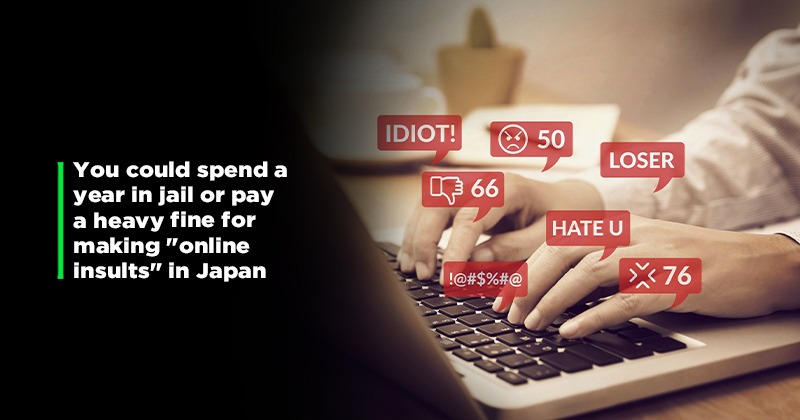 Cyberbullying is becoming a threat to authorities around the world. Now, Japan has taken the first step to legally combat online harassment. On Monday, Japan’s parliament passed a law making “online insults” punishable by jail time.

Japan’s updated penal code will go into effect later this summer. If you’re hurling insults online without a second thought, you might want to pump the brakes. In Japan, you could be imprisoned for a year or face a fine of 300,000 yen (₹1,74,397). This is a significant jump from the previous sentence of 30 days detention and a fine of 10,000 yen.

Why did Japan introduce this law?

Online harassment is a concern worth addressing, especially in light of the suicide of a reality TV star in Japan who suffered abuse on social media. Hana Kimura used to star in Netflix’s “Terrace House” and died by suicide in 2020.

The law is accompanied by a provision that calls for its reassessment in three years to understand how it affects freedom of expression. Even then, the law fails to clearly classify what qualifies as an insult.

Worrying statistics claim that victims of cyberbullying are 1.9 times more likely to die by suicide. But what is cyberbullying? Anything from hate speech, unwelcome sexual remarks, harassment, trolling, and often ransom.

A recent study by CRY (Child Rights and You) claimed that 9.2% of 630 teenagers surveyed in Delhi had been victims of cyberbullying. Only half of them had reported it to their guardians. According to the same survey, India has the highest cyberbullying rate in the Asia-Pacific region, ranking ahead of Japan and Australia.

Have you ever been a victim of cyberbullying and how did you overcome it? Share your stories with us in the comments below. For more in the world of Technology and Sciencekeep reading Indiatimes.com.

Gupta, P. (2022, February 18). Shocking: Indian children are the most victims of cyberbullying in the world | Kidsstoppress. Kidsstoppress |.