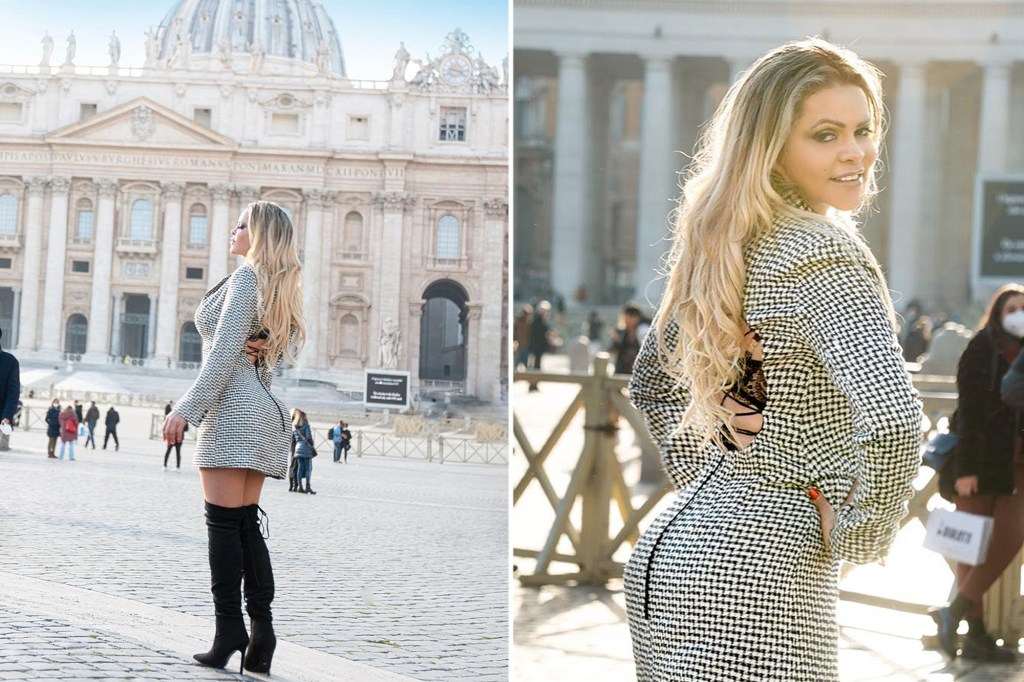 Influencer kicked out of the Vatican for her ‘sexy’ outfit

The Lord has mercy.

An Instagram influencer says she feels “disrespectful” after being kicked out of the Vatican for wearing clothes deemed “too sexy” for the pope.

Juju Vieira, 34, wore a tight dress and thigh-high boots for a visit to the Catholic city-state last Sunday before security asked her to leave due to a dress code violation.

“A man who worked there approached me and told me that the place was for prayers and that I was not dressed properly,” Vieira told Jam Press.

The busty blonde claimed she was “embarrassed” by the orders, as several other tourists heard her being kicked out of the area.

The Vatican has a strict dress code for both men and women, with exposed shoulders and knees strictly prohibited.

An official website states: “Women are not allowed to wear sleeveless tops, crop tops or tight shirts. The shoulders should be covered, and if you’re wearing a skirt or dress, it should cover the knees.

He continues: “It’s generally a good idea for women to bring a shawl and a pair of leggings when visiting in the colder months, as well as a light jacket that can be rolled up into a nice little bag. .”

Vieira says she didn’t know there was a dress code for the holy site, but still believes she was dressed respectfully for her visit.

“A person with common sense will not visit the Vatican in club attire. I looked stylish in my winter clothes, everything matched. I wore comfortable clothes that I would feel good in for long walks,” she said of her sexy suede boots. “Comfort was my only concern.”

Humiliated, Vieira took to Instagram, where she shared her story with her 26,000 followers.

A number of fans were outraged by Vieira’s ordeal, with one calling it “absurd”.

However, others have told the Brazilian-born bombshell that she shouldn’t expect special treatment.

“Well, if you go there dressed with deep necklines, really tight clothes, that’s okay,” one reviewer said. “They didn’t let my niece in too with a miniskirt and belly.”