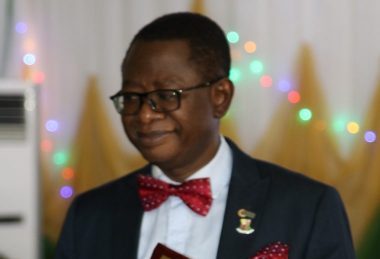 Awards and commendations were bestowed on the pioneering vice-chancellor of the first technical university, Prof. Ayobami Salami, on Wednesday at a symposium in his honor.

The symposium on the theme “Green Technology for Sustainable National Development” was organized by the Faculty of Applied and Natural Sciences, which also awarded two prizes to Salami.

He was so celebrated due to his outstanding performance as a VC, leading the institution to face in his first five years.

Salami won the Faculty Award and the Green Chemistry Leadership Award at the event.

He will step down on May 8.

In his address, Abiodun Salami explained that the faculty considers the outgoing VC an exemplary leader and achiever. She said, “He saw rainbows where others saw clouds. He saw brains that could be developed and hands that needed to be trained. He saw a dense forest that should be brought to light. He saw this place full of mud, where people had to wash their shoes before entering offices and courtyards. But he turned the muddy place into this livable environment. Professor Ayobami Salami transformed the two roofs he encountered here into multiple roofs.

He did, however, identify some of the challenges of green technology. These, he says, include high cost, insufficient information, poor investment, uncertainty about impacts and poor public perception.

Some of the enablers, he noted, would include good policy development and implementation, awareness raising, encouragement of research and adequate funding.

Hurst envisioned a green world where life would be much better, while highlighting some of the opportunities inherent in green technology.

Chikere talked about the need to strategize and overcome obstacles on the roads to achieve professional goals and breakthroughs. Using her own experience as a woman as an example, she said you have to be prepared for personal, systemic and societal obstacles.

During the symposium, which was also attended by the university auditor, Adebisi Adekunle; Director of the Tech-U Academy, Esther Aina; and from the Legal Office, Advocate Yomi Opakunle, Prof. Olukayode Adebimpe, who is the speaker from the Faculty of Natural and Applied Sciences, read Prof. Salami’s quote, while Prof. Ojo also paid his respects.

In his remarks, the outgoing VC commended the faculty for organizing the symposium whose theme, he noted, was highly relevant to humanity at large.

According to Salami, green technologies and other alternative energy sources are the ones any university in the 21st should be looking at, given the reality of dwindling resources and the contradictions occasioned by climate change.

Salami thanked the faculty for having seen fit to honor him, while also thanking all Tech-U staff, who worked with him to make the institution’s dream a reality.