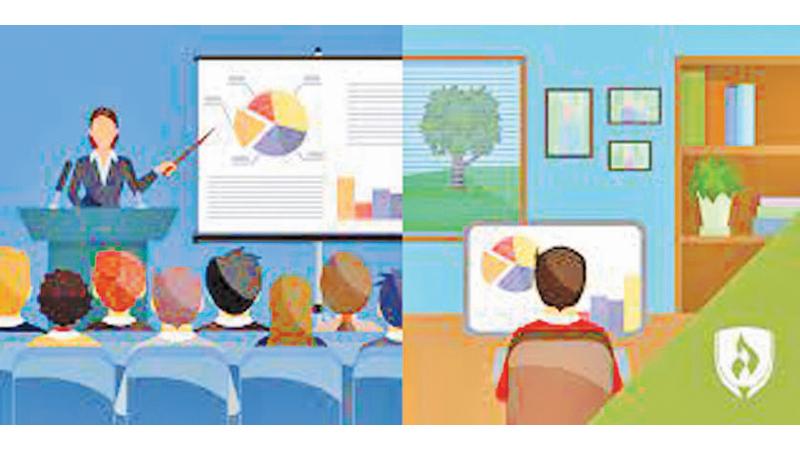 Contrast between physical and virtual classroom

It is now a well-known fact that Covid-19 has caused destruction and devastation around the world in ways no one anticipated. Since the escape, the life the world has known has undergone many transformations regardless of the economic status of countries. Educational institutions around the world have been forced to abandon physical activities in the classroom to stop the spread of the deadly virus.

In Sri Lanka, due to the rapid infectivity of the virus, closures and other strict health restrictions, more than 10,000 schools across the country have been forced to temporarily close, denying education to more than 4 , 2 million schoolchildren and nearly 90,000 university students in the country.

Students were continuously deprived of physical education in the classroom for over eighteen months. As in many other countries, educational institutions, both public and private, have turned to online education which until then was uncharted territory for students of all ages.

Initially, many people believed that learning in the comfort of home can be convenient, efficient and relaxing rather than rushing to school with strict schedules. However, the sense of comfort quickly faded as online education had a huge impact on the mental and physical health of students as well as the majority of teachers.

The general opinion is that although all schools have been reopened recently, online teaching and learning is here to stay forever, perhaps to a lesser extent. Many online channels that came into operation through digital media platforms when schools closed have become extremely popular among students.

There are many reasons why you cannot dispute the effectiveness of online education. Nonetheless, educators and medical experts have found that the method encompasses many negative psychological, physical and social impacts.

The greatest threat, according to expert opinion from leading psychologists in Sri Lanka, is the misuse and abuse of cell phones by students, especially adolescents. An alarming trend in the misuse of cell phones has emerged in both urban and rural areas. In Sri Lanka, especially in rural areas, the technological know-how of parents, in most cases, is limited. Therefore, supervising the use of mobile devices is difficult with adult adolescents.

With the easy accessibility of thousands of computer games and many other harmful applications and information, a student of any age can become addicted to unwanted territories. Yet the coronavirus pandemic has left parents with little choice but to pursue an education online, taking on the added responsibility of being vigilant over their children’s activities.

Addiction to computer games is one of the most disturbing trends among young people around the world today. This can easily be the single most damaging criterion for the mental well-being of children of all ages. Most parents fear that it will become more and more difficult to distract children from cell phone use.

The tendency of students to become addicted to computer games under the guise of online learning is increasing rapidly. Students, especially teenagers, have found various ways to trick and trick adults into finding ways to play computer games or engage in other despicable acts. During an online course, they can use the same device for other activities, even when the camera is on.

The total commercial value of computer games worldwide is estimated at US $ 137 billion per year. The greatest threat is the constant attempts by developers of computer games to lure young people into these games through incessant online pop-ups and other methods due to the lucrative financial implications. A graphical user interface (GUI) display suddenly appears as a small window on the screen, prompting children to respond.

In addition, promoters attract young people by introducing various types of quizzes, sometimes offering rewards as well. According to experts, these games are designed to get children and young people obsessed with play.

The situation around the world is so dire that the World Health Organization, in May 2019, officially voted in favor of adopting the International Classification of Diseases or ICD to include an entry on â€œgambling disordersâ€. According to the WHO, the criteria do not include a certain number of hours spent gambling, but a person unable to stop gambling and follow other routines of daily life is considered a patient.

There are many factors that influence the misuse of mobile technology. Students reported feeling discouraged, bored, confused, and anxious. All of these factors are possible elements for a student to switch to other online applications during their online courses.

In addition, reasons such as poor connectivity, disinterest in the subject, poor teaching styles, and inappropriate study settings can lead a student to misuse the device.

Some of the students this writer spoke to said they were not entirely satisfied with the quality of their online education imposed due to the pandemic. Some of them said that online learning had a negative impact on their academic performance.

Long continuous hours of online learning can create a monotony that leads to a lack of interest. Humans are social animals and boredom can set in if interactions don’t exist enough. In particular, a long time alone and listening to the same person can cause young students to lose interest in the subject, or even generate animosity.

Most students cannot take online education due to the pressure of concentrating in an isolated environment. Again, the unavailability of physical interactions with the teacher and other participants can produce stress and anxiety, according to medical specialists. This may prompt them to switch, on the sly, to other means of relaxation online such as games, movies or other entertainment applications.

According to some experts, as little as two hours of exposure to blue light at night can slow or stop the release of the sleep hormone, melatonin. Harvard Medical School, through a journal, reveals that blue light may contribute to the causation of cancer, diabetes, heart disease and obesity.

Therefore, parents should limit children’s screen time not only to regulate sleep patterns, but also to protect their eyes.

Human eyes do not filter blue light, and excessive exposure can also lead to long-term problems with myopia and concentration of attention. Students should be informed that they should put away electronic devices at least thirty minutes before bedtime.

There is no doubt that online education also has many positive aspects such as learning flexibility, ease of access to time and place, absence of normal classroom pressure, efficiency and effectiveness. ‘adaptation to various learning styles, etc.

Nonetheless, aside from the negative issues discussed above, without the physical classroom, students deprive themselves of socializing with other students where they learn life lessons. They lose the opportunity to associate with people from similar social and cultural backgrounds, which can lead to isolation later in adulthood.

One of the most important aspects of an aspiring child, student-teacher interaction is taken away from students with online education methods. Learning in the classroom allows a child to actively participate in the discussion physically.

This offers a dynamic learning experience: while in e-learning the interaction is at a distance via emails, chats, forums, webinars, etc. In addition, in e-learning, students study in confinement and must be motivated to continue to concentrate properly.

The generation born since 2009 known as the â€œAlpha Generationâ€ or the digital natives who are digital tech savvy will be the generation the world will see now.

Thus, no one can dispute the use of digital in schools to teach future generations. Therefore, the solution is to adequately educate the younger generation on the repercussions of the misuse or abuse of digital technology. It is time for the education authorities to open discussions to design an appropriate political framework and encourage the Government to implement such policies.