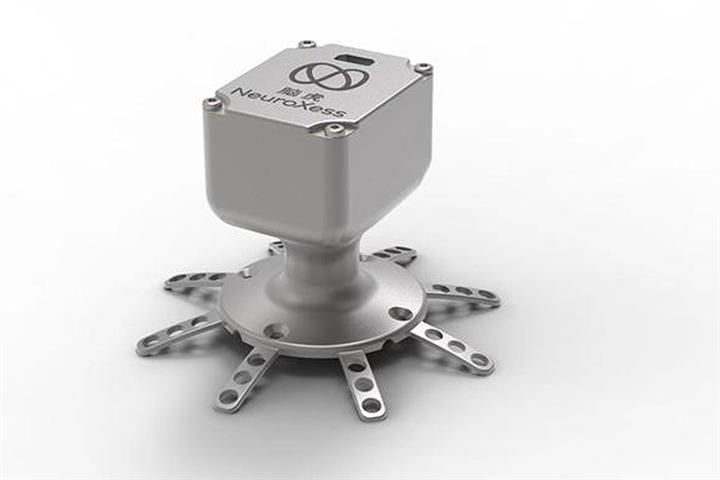 (Yicai Global) Sept. 5 — China’s first semi-invasive brain-computer interface device, which serves as a direct communication pathway with the brain and can be used to help patients overcome motor or sensory impairments, has was presented at a recent AI Summit.

The device, which weighs only 38 grams and measures only 32 cubic centimeters, can be used in the treatment of Parkinson’s disease, epilepsy and other neurological diseases, said co-developer Peng Lei during the World Conference on Artificial Intelligence in Shanghai on September 2. .

The device, which does not require semi-manual preparation like most medical devices, has a unique silk protein electrode wrap technology that can avoid blood vessels when implanted in the cerebral cortex and thereby minimize damage, said Peng, who is also founder and CEO of life science company NeuroXess.

BCI technology allows patients with impaired motor perception functions, such as those with amyotrophic lateral sclerosis, high paraplegia and aphasia, to continue to “talk” with their minds despite being unable to speak , fellow co-developer Tao Hu told Yicai Global. And although they can’t move, they can still control external mechanical equipment.

Peng and Tao, who is also deputy director of the Shanghai Institute of Microsystems and Information Technology at the Chinese Academy of Sciences, have made great strides in the practical application of this cutting-edge technology. Last year, Tao won the WAIC Super Artificial Intelligence Leader Award and this year it showcased the technology in the form of equipment.

So far, the device has passed clinical ethics reviews by medical institutions such as Huashan Hospital and Ruijin Hospital, and is currently undergoing clinical trials for the treatment of major neurological diseases such as than ALS and high paraplegia, industry insiders said.

BCI technology is complex engineering and requires the convergence of several disciplines such as microelectronics, neuroscience and psychology, Peng said. But with continued breakthroughs in fundamental technologies in different fields, we believe that BCI technology will soon reach a major inflection point, he added.

“Last December, the American company BCI Synchron enabled ALS patients to post messages directly to social media,” Peng said. “And this year, a study published in the medical journal Nature showed that humans who type with the mind can achieve 99% accuracy.”

Looking ahead, Peng said that in the next five years, BCI devices will mainly be used to help patients with ALS, high paraplegia, and visual and hearing impairment. But over the next decade, BCI technology will branch out into healthcare, gaming, education, and other areas. It can help children improve their concentration and alleviate attention deficit hyperactivity disorder.

In the future, BCI technology is expected to realize the fusion of knowledge, emotions and memory to advance the coexistence of humans and computers.

Student loans: Differences between private and federal loans and which one is best for you?

Be the apple of your own eye with this offer