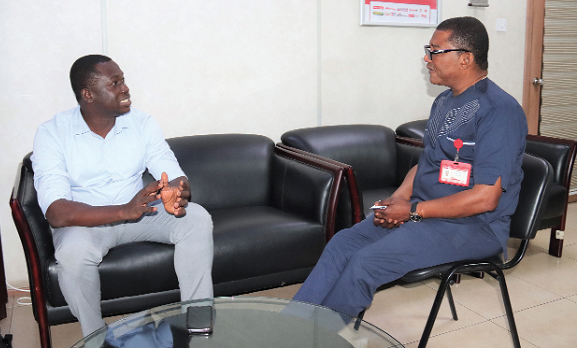 He said small-scale mining was not bad, but the irresponsible way in which some miners conducted their business, the rampant use of mercury, the dumping of tailings into waterways and the mounting of machines, such as the Chanfans, in the waterways needed to be reviewed.

“I’m actually for mining, basically because I know mining can be a substantial economic boost to rural and national economies, except how it’s done is the problem,” said Mr. Yeboah when he paid a courtesy to the editor, Graphic, Kobby Asmah, last Wednesday to engage him on how to work together to support the fight against illegal small-scale mining, popularly known as galamsey.

The development planner and consultant said the use of mercury by illegal small-scale miners pollutes the environment and poses serious health threats, first and foremost to individuals in artisanal mining communities.

A recent study conducted by the Chemistry Department of Kwame Nkrumah University of Science and Technology and Aarhus University, Denmark, concluded that residents of Gbani, a mining community in the Upper East region, were exposed to the non-carcinogenic effects of mercury.

Studies have also shown that prolonged exposure to mercury can cause mercury poisoning and kidney damage and impair hearing, vision, and balance.
Miners who come into direct contact with mercury during gold mining inhale mercury vapors, putting them at greater risk.

Through the use of contaminated soil and water for livestock and crops, mercury can also enter the food chain, leaving communities near artisanal mining sites at risk of accumulating mercury in their bodies, which is particularly dangerous for pregnant women, children and the elderly.

Speaking on the issue, Mr Yeboah explained that most miners in the country have a strong affinity for mercury use, which is why Commodity Monitor decided to step in by providing mercury-free equipment to help solve the problem of irresponsible mining.

Known as Gold Katcha, the equipment, which was introduced by Commodity Monitor to the Ghanaian market, is said to be more efficient than Chanfan, as it recovers up to 90% of the gold from the ore, compared to an average of 35 % recovery. that small miners record.

The equipment, among other things, performs washing, crushing and grinding at the same time as the concentrator washes the ore and recovers fine and coarse gold.
Apart from this, the equipment – ​​approved and purchased by the government for small-scale and community mining programs – is also used for mercury remediation.

“I think if we are able to get the right technology, it can give a very big boost to the fight against galamsey,” said Yeboah, who has done extensive research and also written on governance. natural resources.

“And that’s why we’re bringing this narrative to change the status quo to ensure mining is done responsibly,” he added.

He revealed that the Gold Katcha, currently from South Africa, would be produced in the country by the first quarter of next year.

Currently, he said, more than 50 machines have been deployed in mining communities such as Wa, Bongo, Tarkwa, among others.

Asked by the editor how we can eliminate illegal mining and promote responsible mining, Yeboah said it would take a concerted effort from government, the media, mining companies, chiefs and all industry stakeholders.

Ensuring responsible mining, he added, would create an opportunity for more Ghanaians to venture into the mining sector, which is currently dominated by foreigners.

This, he noted, would help boost other sectors of the economy.

For his part, Mr. Asmah welcomed the collaboration that Commodity Monitor was seeking to give a boost in the fight against illegal mining.

He said the story of illegal mining had been widely told by the media, but how mercury was used and its subsequent impact on living organisms had not been adequately told.

Mr. Asmah assured the leadership of Commodity Monitor of the Graphic Communications Group’s commitment to informing and educating the public about canker in order to trigger positive change.